Why does Google Chrome use so much RAM?

I know this issue is not Linux-specific since Chrome did the same thing on Windows, but I want to bring it up anyway. Currently I have thirteen tabs open in Chrome and this is what System Monitor looks like: 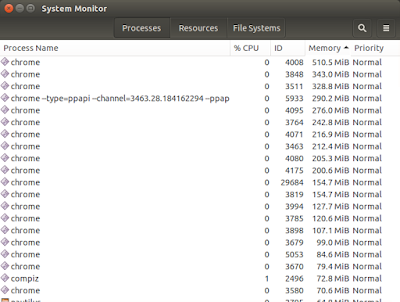 Thirteen tabs, and nineteen out of the top twenty memory hogging processes are chrome. Seriously, how can Google Chrome take up a half-gig of memory for just one process? I have done a lot of Web application programming with JavaScript frameworks such as jQuery and Dojo so I understand web pages are more complicated now than they used to be. However, it seems to me these memory numbers are an order of magnitude off as I would expect even the most dazzling Ajax-ified web application to take no more than 50 MiB of memory. Even then, at 50 MiB that is some serious HTML/CSS/JavaScript/images/videos/etc.

And I thought Microsoft was terrible at memory management, especially with their Office apps.

Edit: I received a tweet from @perlmeister1l pointing me to a Chrome Help page called Reduce Chrome memory. Basically, Chrome has its own built-in Task Manager that allows you to see exactly which tabs are consuming your CPU and RAM resources.

While this is definitely more helpful than the System Monitor, the only suggestion provided in the help was to kill tabs you no longer need to free up memory. This is not entirely helpful since I would have done this anyway. Rather, I would prefer to know in greater detail about exactly why my Yahoo! Mail tab is taking up 536MB of RAM. How much of that is the DOM? JavaScript? Images? Ads? You get the picture.
Posted by Edward Smith at 10:00 PM